On Saturday I received another polar bear to add to my collection. It came from a private swap with another Postcrosser. She wanted penguins – which I have in plenty – and she had a polar bear that looked very cute.  So the deal was done.

However there must have been a bad mail day somewhere in Europe when my polar bear was on the way, as he arrived looking like this:

What appears to have happened is that the mail has got damp somewhere along the way   (which is completely understandable with the nasty nasty weather in the northern hemisphere recently) – there is also a reverse ‘transfer’  of another address on the back of the postcard, and this turned out to be a Czech stamp attached to poor polar bear’s face.  Our builder (the stamp collector!) suggested a little water on a cotton bud to make the stamp damp again and it might peel off – and then I suddenly remembered that in my stamp collecting days I used to sometimes steam the stamps off things I wanted to keep. So PB and I carefully tried that, and it was a great success!!!  There are just a couple of green smudgy bits where the colour has come out of the stamp, and other than that my polar bear is all better. (Well, he will be if he ever mananges to get out of that  yoga position!!!)

New improved Polar Bear plus the stamp that was stuck.

The info on the back is in German  and says:

Which according to Google translates roughly as: Baby polar bears learn their body functions. They are as small as moles(?) when born in the ice caves and must grown quickly. A male polar bear can be as much as 3 metres long and weigh 600 kilos.

Help with the German anyone?

If someone who speaks German would like to give a better translation I’d appreciate it.

I actually had a fantastic mail week in the end – after only one card on Tuesday initially, because on Friday I also got SIX postcards! Three cats, a lovely wolf and a curious Football mascot called Buck from various swaps, and a wonderful weird cactus from ErikaJean!!   Some of these postcards may be coming soon to a blog near you.

A Postcard and a Puzzle

This week I received quite a few Postcrossing postcards, and a curious gift from our builder.  He discovered that I liked postcards – turns out he collects stamps, and he gave me a bundle of old postcards that he was about to throw out.  So now my mission is to find out what I can about them. They are French, German, Swiss, and one Italian one, and maybe up to 50 or 60 years old.

So today I’ve been having a little lesson about the Swiss Alps – as it happens one of the Postcrossing cards I received this week is a picture of these mountains, along with two of the mystery postcards!

Firstly, my Postcrossing card which is from Somedaisy in Switzerland, and took 11 days to get to me. It seems that Somedaisy is a very energetic person as she wants to do some serious mountain climbing! 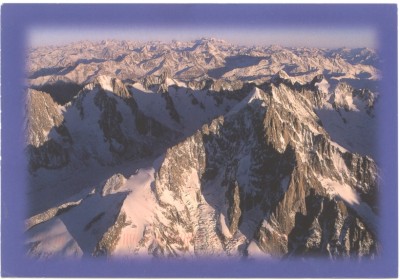 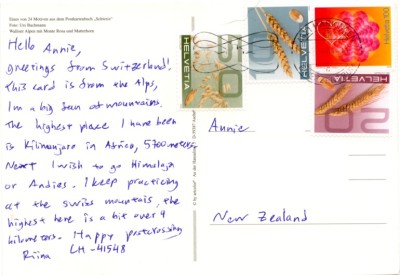 This picture is the Walliser Alpen  (otherwise known as the Pennine Alps. ) This mountain range is partly in Switzerland and partly in Italy.  It has high peaks – 10 of the twelve highest peaks in Europe – and steep deep valleys. It is a very culturally diverse area and often different languages are spoken in neighbouring valleys.  Two famous peaks that are in the Pennine Alps are the Matterhorn 14692 ft/4478 m and Mount Rosa 15203 ft/4633 m.  It is possible to drive THROUGH this mountain range via the 5.7 kilometre long Great Saint Bernard Tunnel.  It is also possible during summer to drive OVER the Great Saint Bernard Pass. Both the pass and the tunnel are named after St Bernard who founded a hospice and monastery high on the Pass in 962 in order to assist those who were attempting to cross the Pass.

Now – the first of my puzzle postcards.

Grindelwald and The Wetterhorn

This is a view of the village of Grindelwald, and the Wetterhorn.  The Wetterhorn is a peak in the Bernese Alps of Switzerland. Its  tallest summit is 12142 feet or 3692 metres, but there are actually three summits of almost similar heights. Grindelwald is also the name of the municipality (county) that the village is in.  It is a small village with a population of around 4000 people, and tourism is important to the whole area – as you might expect in such a beautiful part of the world. The scenery around the area has had a starring role in a range of films including a James Bond movie, a Star Wars movie and The Golden  Compass.

The photo below comes from my old friend Wikipedia, and shows almost the same view as the postcard. PB and I have been trying to figure out if any of the buildings are the same!!

My puzzle is – how old is this postcard and is it possible to tell when the photo was taken – which may or may not be the same era?  So any ‘vintage’ postcard people out there – please help me out.

This one has a little more information in that it has been postmarked, and written on (in German?) The postmark says -4.X.52, which I’m reading as 04 October 1952. And also the numbers 2362m – which I’m suspecting is the height of the mountain as that is also on the postcard – so perhaps it was specially postmarked as a touristy thing at the top of the mountain.  The funicular  is called the Niesenbahn, and was opened in 1910 – which I imagine must have been quite a feat of engineering in its time.   It continues to run today during the European Summer  but according to its website , it is in ‘hibernation’ at present!  This is basically a type of cable car where the carriage travelling down balances the one travelling up a steep incline. The Niesenbahn is the longest ‘continuous cable’ funicular in Europe. There are steps going up the mountain beside the funicular that are used for maintenance and it is reputedly the longest staircase in the world. The Guinness Book of records says so, so it must be right, but unfortunately only maintenance people can access the steps.

The village at the bottom of the Niesenbahn is called Mulenen and the summit is called Niesenkulm and is at 2362 metres.

The other interesting thing about this postcard is that it has the names of the peaks printed right on to it – but I think I’ll have to get out a magnifying glass to read them!

In the quest to restore my craft room/office/storage of teaching resources space into something resembling …. well, I’d setttle for a room where I can actually FIND stuff ….. I came across a pile ( hmmmm – truthfully – several piles of )stamps.  They used to go to a mission group, but the group doesn’t want them any more.

But if you want some of them I’m sure we can come to an arrangement. Because you’ve got something I want –Postcards!!!

So here’s what we’ll do. The first five stamp collecting people who leave a comment on my blog telling me that they want stamps will get some of them.  Similar to, but not exactly the same as, the example below —  around about 15-16  New Zealand Post stamps of different denominations with a couple of double ups, and a couple from the other random stamp creating companies we have here.  What you see is what you get in terms of the sort of condition they are in. 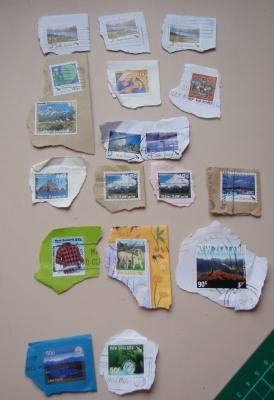 Similar (but not exactly the same) assortment to this.

Your email will be on you blog comment when I recieve it, so I will email you back and we will swap addresses. You will send

me a postcard – linkie here to my Postcrossing profile which explains what kinds I like.  And I will put your stamps in a little plastic baggie (geocachers have lots of those!) and in an envelope, and send them to you!  So you’ll also get a bonus stamp or two on the envelope.

If this experiment works I will do it again early-ish next year, as I will have more stamps by then due to the iminent arrival of Christmas cards.

Let me know what you think?