Posted on February 6, 2011 | 1 comment
Ruger & Neve are, to be honest, don’t play well with others. Neve would – given half a chance, as she’s a busy little girl who likes to make friends with anyone human or canine. Ruger, on the other hand is territorial.  He doesn’t like anyone to play with his sister. Not that he necessarily wants to play with her, but no one else can either.

However they do love when my friend K. comes around with her two dogs. Sometimes we go to K’s house too. The number of dogs that ends up THERE can be quite variable!! On Friday we had six, and on Saturday when we all went around there for a meal, there were seven.

So it can be quite a riot.  Ruger usually entertains himself playing with his Jollyball (Thanks Penny & Velcro!!) But the rest of the tribe prefers to have a human throwing their tennis balls or toys for them.  And with less humans than canine, the dynamics of that doesn’t always work out well!!!

So here we all are: 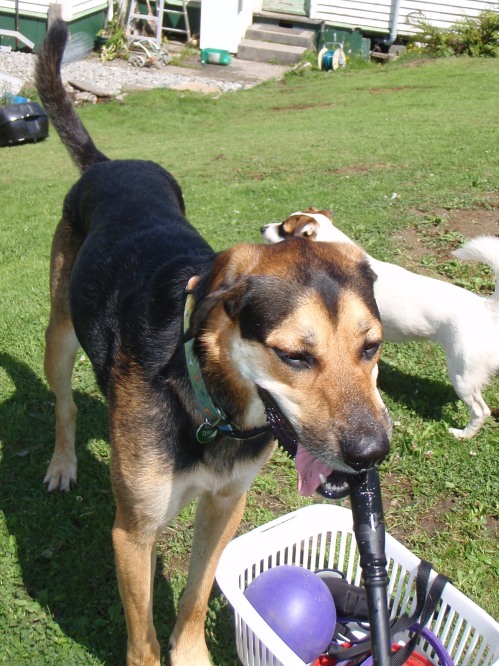 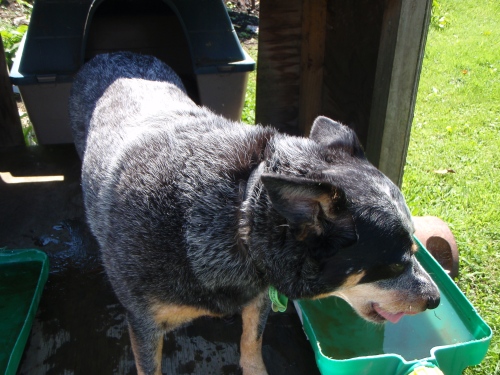 Last week I was working on the ‘other side of town’ near to PB’s Mum’s place.  The hours I was working left me plenty of time to take Diva the dog for a few walks. She’s been missing out on her walks since MIL had surgery. I really enjoyed walking in a different area of town too.  Diva is a Border collie so she’s pretty energetic , but she seems to be well behaved on walks – more so than the canine rascals at this house!!  MIL lives nearer to the river 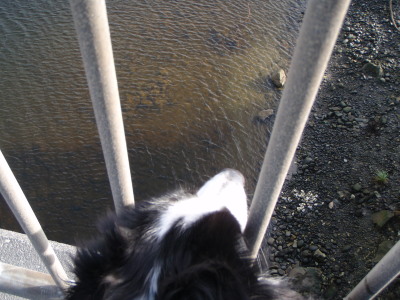 and the beach, so there’s lots of great places to walk.  We got in some walks on the streets, 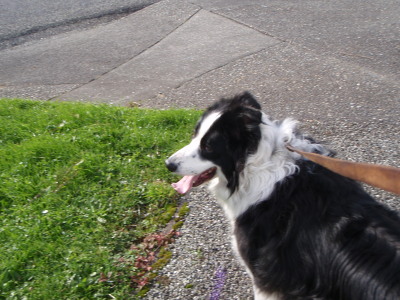 along the flood wall

and a newish track through a reclaimed area that used to be a rubbish (garbage) dump.

I saw two White Herons, which was a most amazing thing. I’ve only ever seen one in any particular place before. There was one on each side of the flood wall. Unfortunately they are never close enough to get a decent photo with our little point & shoot camera – so look at the links for better photos.  We also saw swans & ducks and a White-Faced Heron.

The White Heron  (Egretta alba modesta) or Kotuku  is quite a rare bird in New Zealand. They breed in only one place near Okarito in South Westland, which you can only see by going on the one tour  which has Department of Conservation permission to go into the area.  PB & I did the tour a few years back and it’s something I’d like to do again one day.  Outside the breeding season solitary kotuku can sometimes be seen throughout New Zealand in estuaries and other waterways. 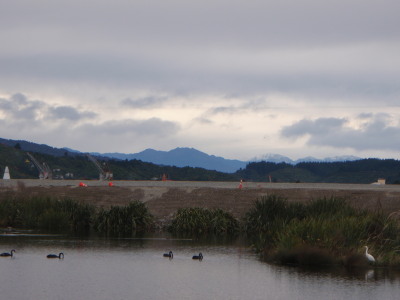 And spot the Other white heron!!

It is thought that Kotuku were never particularly common in New Zealand but they became endangered as their beautiful plumes were very desirable for decorating ladies’ hats later in the  1800’s. There are perhaps only a couple of hundred at most in New Zealand, although the E. Alba modesta has a wide range including Australia & parts of Asia.  A closely related subspecies may be known to my Northern hemisphere readers as the Great Egret.

Just a Bit of Fun

Eight cats & kittens came into the SPCA yesterday. Space is running out in the isolation unit!! These two little guys are supposedly 8 weeks old — the manager is not so sure …..

They are not too keen on humans – so my job today was just to hang out with them and pat them. They are now called Aspen & Ginko, and they are pretty crazy playful like all kittens this age.

So here you go, just for fun, a bit of kitten madness!!

Posted on May 23, 2010 | 1 comment
PB wasn’t in tonight, so Kelty had to do with sitting by me & the laptop instead of by PB’s computer. He sure wasn’t impressed – but I’m not sure whether it was because he couldn’t sit in his normal place & get his normal attention from PB or because I was flashing a camera in his face!!!  Or perhaps just because life is often not up to the standard that a discerning cat demands.

There is a somewhat better photo at Flickr.  But this one is the last one for the week so here it is!
To join Last Photo Taken Sunday check out Tracy’s blog at Tracy’s Topics!

Quite a number of people on Twitter & Flickr have asked how our Neve is. As it’s a bit tricky to explain in 140 characters, here’s the update.

Neve’s tumour is a histiocytoma and is considered to be benign and it is unlikely to re-occur.  Apparently this type of tumour will regress by itself in a few months, so doesn’t neccesarily need to be removed.  Flatcoat Retrievers, English Bulldogs, Scottish Terriers, Greyhounds, Boxers, and Boston Terriers are the breeds that most commonly get this type of tumour, and usually young dogs – under three years – get them. So Neve is the wrong breed & the wrong age, but I guess that’s what you get with averages & statistics!!

She will get her stitches out on Monday, and should be all good after that. I do think she has enjoyed being spoilt and going everywhere with us at the moment though. She looked quite put out this morning when I went off to the SPCA without her!!

(This link’s for you Tracy! Canine Cutaneous Histiocytoma )

Well – this is one for the pet people amongst us:

There he was lying on the couch beside me looking cute, so I picked up the camera – could have been an ear or an eye or a nose that was my last shot – but it was a paw!

On Sunday we had another busy day! Even the dogs had a busy day – although Ruger’s busy day only lasted about half an hour.

We were up early again to help set up for the Fun Day. Ruger & Neve came with us, but as soon as some of the other helpers and their dogs started arriving, he started misbehaving.  Silly boy.   He had been OK for a bit chewing on his Frisbee, but then after a while none of us appreciated getting deafened by barking. So home he went.

So we assembled the gazebos for the food & raffle tables to go under, put up a banner, organised chairs & tables and generally made the dog park look presentable. Before we knew it a couple of hours had passed and it was time to open for the public.

Pretty soon, people started to arrive and enrol for the fun events. We had very serious competition in some events – such as:  The Best Dressed Puppy & Dog, Best Vertical Shagpile, Best Splotches, Dog & Owner Lookalike and the Sausage Retrieve.

There was the usual number of run-aways, and dogs who embarrassed themselves & their owners by peeing as soon as they got in the ring (not to mention any names starting with ‘N’!)  The Sausage Retrieve turned into the Sausage Devour for most competitors, but the SPCA Dog Manager and her new young dog came up trumps because Phoebe brought MOST of her sausage back, so she won the prize for that one.

The ‘registration’ pack had some treats, a can of dog food, and some coupons. 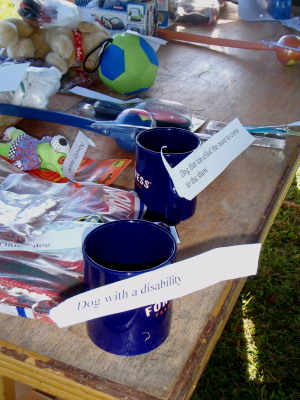 There were ‘spot’ prizes for lots of different things too.

All the ‘smoothies’ parading around the ring.

Next to us is Cujo the St Bernard! Behind us is the building site for the new SPCA Centre.

“Just give me the darn treat, Mum!” 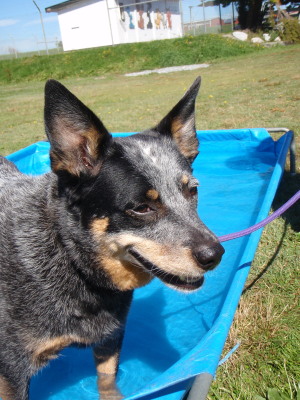 Taking a break in the paddling pool.

Ready to go on the obstacle course.

Neve was entered in:  Best Smoothie, Best Splotches and the Obstacle Course.  She didn’t get any prizes, but we thought she was a winner anyway!!

And we thought we were on to a winner, because she was so tired that she just slept for the rest of the day!  She lay on the couch, snoring loudly.

And if I was clever enough – there’d be a video of a snoring Neve here – perhaps tomorrow …….

And as for Ruger – well, everyone needs a friend to cuddle with when they are feeling all alone