No Go for No Name

Caching has been a rare event this year for one reason or another. Last weekend we got a chance to get a few local caches with some caching pals who are moving to the great Western Island soon. I only got a couple of pictures for our five caches, but this weekend we took the dog on an adventure to get a few more  caches – and pictures!

So – from last weekend: 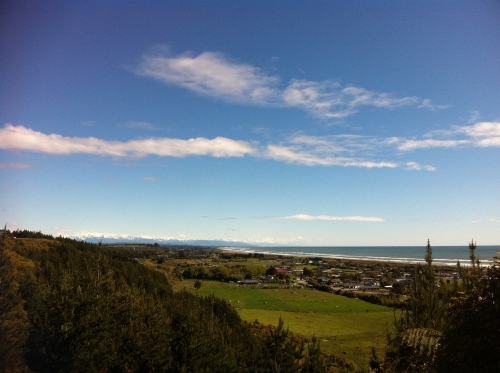 The view from around about  GC2M165 BGSc: Block Course Which we did not attempt. I value my arms, legs, head, spine and every other bit of me too much.   Properly equipped I’ll be more than happy to take it on.

And somewhere in there is a cache of course. Cam Bash GC3084C. We found the cache eventually with a couple of ‘suggestions’ from our friend who had already done this one.  PB was the one whose eagle eye finally spied it. It wasn’t so much that it was a bush bash to get in, as there is quite a nice little geopath now once you hop over that fallen log & head a little left, but due to being totally under cover the GPS was pretty slow to respond. So we still had to look around over a fairly wide area. And we may have found a cache, but somewhere in there I lost my sweatshirt that was tied around my waist ….. or not.

Today we went to the notorious NoName Road. There are a few caches out that way that are all ‘drive-bys’ – in the Moneydork definition of a driveby.
GC2J1Q6 Kumara Crossroads    was easy enough to get to  – the ‘cobbled ‘ road made for a bumpy ride, but other than that it’s fairly accessible, and appears to have a resident weka acting as guardian.  PB made a quick find here. And then we watched the weka for a bit. 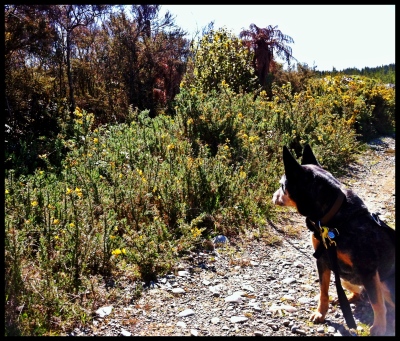 After that we were going to head a bit closer to  GCR2HC No Name, but we couldn’t make it very far at all and didn’t fancy a long walk, so we might tackle that another day from another direction.

We opted to turn left instead and try for Gc2JCB1 ‘There is no shame in having NO NAME’. This was definitely a 4WD cache tackled from this direction, but would be fairly easy to get to from the Marsden  end. 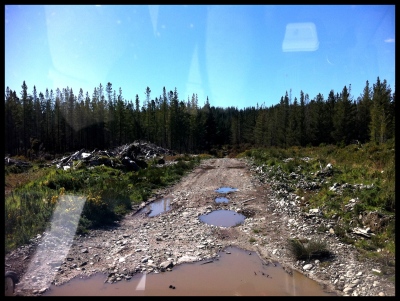 Heading in to the forest 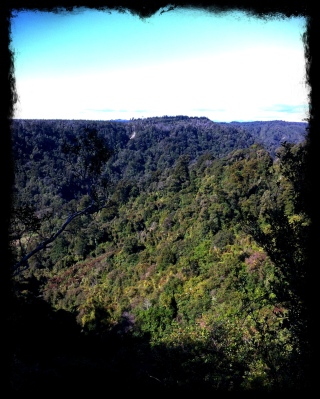 Not many places to see the views for the trees 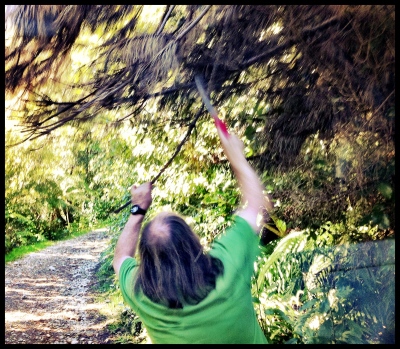 Had to do a bit of landscaping along the way 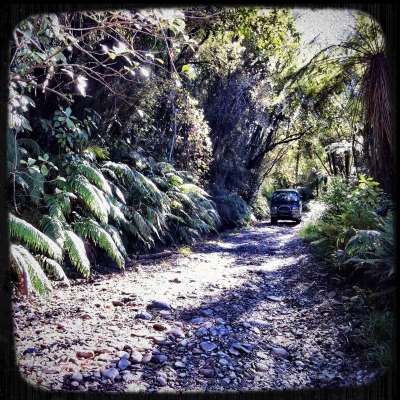 Some pretty bits of track 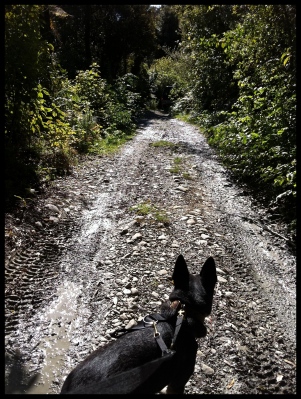 Annie made the find here with Ruger to witness the log signing and PB as photographic director.

Now — I know you’re out there. So please feel welcome to comment, even if you’ve never commented on my blog before. Heck, even if I don’t know you!!! Even if it’s the first time you’ve read this blog.  Those ‘other people’ who DO comment never knew me before I started this blog either. Does that make sense?

And Robert – yes, you may comment, even thought you knew me before I started the blog…… LOL!

Other places I may be found these days include:

My blog is the main place you can get to know me and be known so if you haven’t commented here a bit, I’m not likely to recognise you or ‘friend’ you elsewhere.

So if I have turned down anyone’s requests, my apologies – you are most welcome to come & chat here & make yourself known!!

Postcard people – would you be interested in getting a bunch of New Zealand postcards – written or unwritten as you prefer?? Let me know. I’m thinking of putting together a set & having a lucky draw soon.

Posted in My Place, Postcrossing

What to do on a Friday night when you don’t actually have anything that you HAVE to do? Why, caching of course! We don’t often have a Friday night to ourselves it seemed, but we did this week – and the weather was beautiful too.

We had a little circuit out into the countryside planned. Our intention was to pick up four caches – including two puzzles that we’d had solved for awhile. However we got sidetracked by the amazing sunset …. and by the neighbour of one of the caches. He’d been getting curious about what people were doing across from his house, so he came out to have a look. So now he has a bit more of an idea about geocaching, and thinks that a scavenger hunt around the whole world sounds like a bit of fun!!

So now we’ve still go two caches for another weekend, and saw a really vivid sunset. This would have been amazing  to watch down at the beach.  Our photos don’t really do it justice. These are from three slightly different locations. 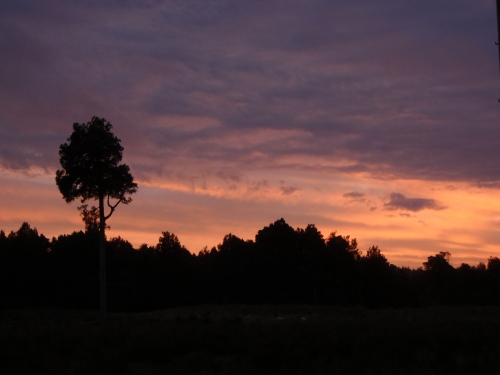 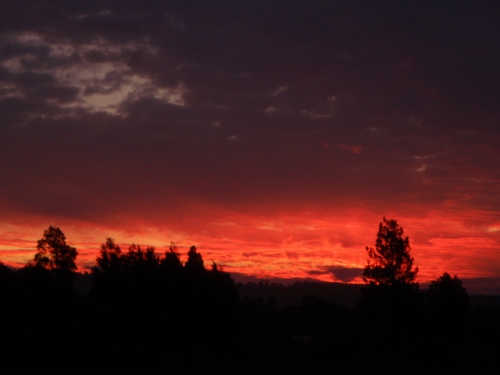 I now have really big diggers & trucks tearing up the road outside my house.
My water went off this morning & when I looked out the window they seemed to be doing stuff in an ever widening pool, then a pump started up. I bet THAT little episode wasn’t on their plans. 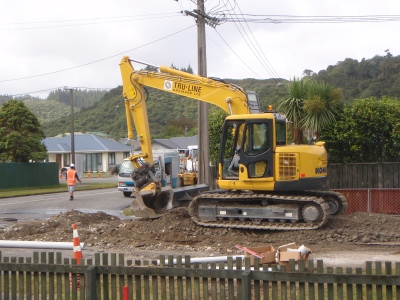 From the spare room window

From my back gate

I’m beginning to understand why the Christchurch residents have had enough of aftershocks!!

Posted in My Place, New Zealand

THIS is why my house feels like it has a permanent earthquake at the moment. The council are laying a new sewerage system in our neighbourhood. We get four months of noise, mess, shaking & road closed –  this week will be the worst as they are right outside our house.  We are at an intersection, so we will have the noise & machines for twice as long as most people. The whole house is juddering & shaking. The poor dogs look quite surprised from time to time when there is a particularly big judder. 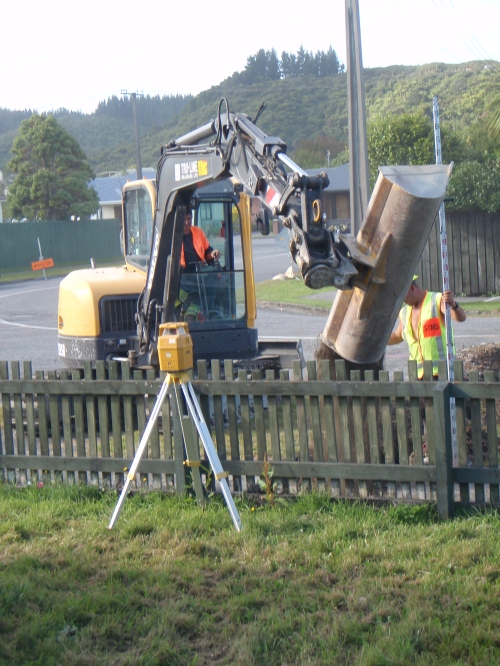 I just hope my poor postie can still get through.

Posted in My Place

Our second cache hunt in town for the year was a definite failure. Our percentage looks pretty bad so far. LOL!  It was the sort of cache that you just drive past & scoop up – apart from the 2.5 difficulty rating should have given us a little warning. We made it into a little walk by parking along the beach a bit so we could do a loop along the beach & back through the cemetery.  So at least we got a nice little walk & our bit of exercise for the day. Here are a couple of pics, but not a triumphant one of PB holding a cache after his 15 minute plus searching.  Oh well, maybe next time. 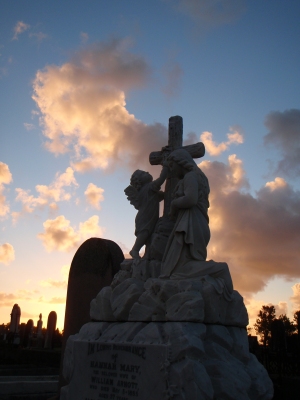 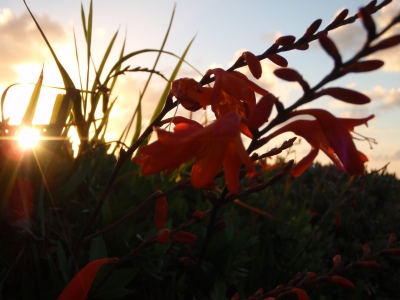 We’ve had little adventures for our first two hunts around town so far this year.

The first – fortunately – was a success. Just as well, as we’d bashed our way up a small hillside through the trees, vines, ferns and nasty prickly gorse bushes, just on dusk. It was a mighty crazy idea to decide to go cache hunting at 9:00pm – even in summer, as it was pretty gloomy under the trees – and practically dark on the homeward journey.   Just makes for more fun though. We never really saw the ’view’  this cache is supposedly about though. The cache owner is a bit taller than us, so I guess we were at a height disadvantage.  Plus the semi-darkness didn’t help!   PB found this one – in a place I’d already looked.  So this photo gives an entirely false impression. LOL!

Here is Ruger checking up on his favourite blog!! This is his California friend Velcro.  She’s a pretty cute Red Heeler.

PB took this photo over my shoulder. You can see a whole bunch of other stuff in the photo too. Neve curled up at the other end of the couch. The other computer which PB was on checking out the Trade Me  forums (kind of Kiwi version of eBay), by the looks of things. The painting on the wall is by a friend of PB’s uncle, and is a street from my home town. It was a wedding gift from PB’s Mum.  You can see some of my postcards in the postcard holder thingie that PB & I designed (yes Erika – we are going to make another one soon, take photos, and blog – I haven’t forgotten!!)

To find out more about Last Picture Taken Sunday, check out Tracy’s Topics!