One of the cards I received this week that really appealed to me is this one from Beachyblonde. 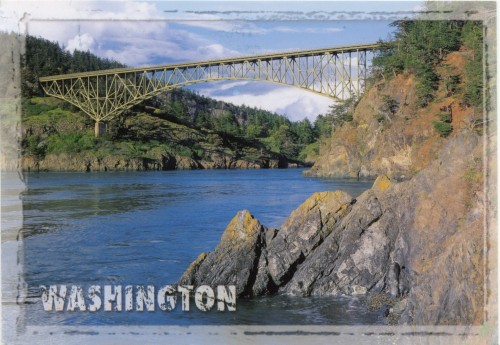 According to  the back of the postcard it shows the bridge over Deception Pass at Whidbey Island, Washington State.  I like the subtle colours and how the border & wording have been done on the card – as well, of course – as the bridge picture.

This area is part of the Deception Pass National Park which is the most visited park in Washington State.  Deception Pass itself is a ocean pass between two of the islands in the area. It is very dangerous due to changeable water currents that may result in whirlpools, eddies & standing waves depending on the tidal flow.  So ferries often have to wait until conditions are suitable before entering the Pass.

The bridge goes between Whidbey Island to Pass Island and then Pass Island to Fidalgo Island.  It was built 1934-35 and was declared an Historic Place in 1982.  Now days it costs more to paint the bridge than it originally did to built it!

I also really liked the stamps that Beachyblonde used on this postcard – a cute kitty that reminds us to ‘Adopt a Shelter Cat’ and some lovely purple flowers.

On Saturday I received another polar bear to add to my collection. It came from a private swap with another Postcrosser. She wanted penguins – which I have in plenty – and she had a polar bear that looked very cute.  So the deal was done.

However there must have been a bad mail day somewhere in Europe when my polar bear was on the way, as he arrived looking like this:

What appears to have happened is that the mail has got damp somewhere along the way   (which is completely understandable with the nasty nasty weather in the northern hemisphere recently) – there is also a reverse ‘transfer’  of another address on the back of the postcard, and this turned out to be a Czech stamp attached to poor polar bear’s face.  Our builder (the stamp collector!) suggested a little water on a cotton bud to make the stamp damp again and it might peel off – and then I suddenly remembered that in my stamp collecting days I used to sometimes steam the stamps off things I wanted to keep. So PB and I carefully tried that, and it was a great success!!!  There are just a couple of green smudgy bits where the colour has come out of the stamp, and other than that my polar bear is all better. (Well, he will be if he ever mananges to get out of that  yoga position!!!)

New improved Polar Bear plus the stamp that was stuck.

The info on the back is in German  and says:

Which according to Google translates roughly as: Baby polar bears learn their body functions. They are as small as moles(?) when born in the ice caves and must grown quickly. A male polar bear can be as much as 3 metres long and weigh 600 kilos.

Help with the German anyone?

If someone who speaks German would like to give a better translation I’d appreciate it.

I actually had a fantastic mail week in the end – after only one card on Tuesday initially, because on Friday I also got SIX postcards! Three cats, a lovely wolf and a curious Football mascot called Buck from various swaps, and a wonderful weird cactus from ErikaJean!!   Some of these postcards may be coming soon to a blog near you.

As it happens, my last picture for the week was a line-up of mail boxes, so I thought I would add the other mail box photos I snapped on our journey this weekend.

An old milk can

It IS the house!!

To Match the House?