We have a pretty quiet time, not being big party animals, and we did even (accidentally) see in the New Year – more because we hadn’t yet gone to bed, than because we specifically still planned to be up at midnight!!!

Earlier in the evening we spent some time with PB’s Mum and had take-aways for tea. (She has  big day of eating planned for us today, so no-one much wanted  to cook last night.)  We realized it was time to educate our readers about the traditional Kiwi take-away of ‘fish and chips.’  The Brits amongst you will be familiar with this concept – but I think it is a foreign one to the American part of the world.  So, as a picture says a 1000 words, here are our fish & chips! 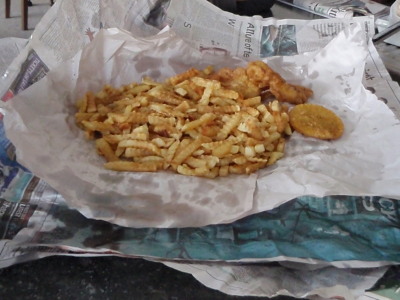 Cover them with tomato sauce (similar to ketchup.) 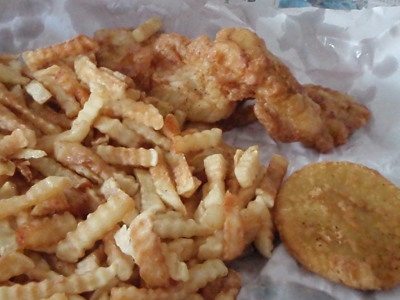 Fish, chips and a potato fritter

We also showed out colonial heritage by watching a bit of the ‘Royal Variety Performance’ with PB’s Mum, before heading off to another  hangout.

On the way through town we were treated to an amazing glowing orb as the sun set – PB tried to get photos  and we zoomed down to the beach, but it was almost gone by the time we got there. 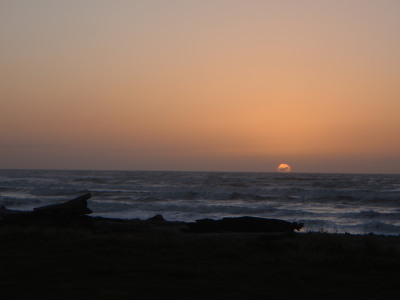 We hung out with some folk from church and ate delicious desserts and played a crazy game called ‘Man Bites Dog.’ There had been plans for a bonfire on the beach and fireworks, but the weather was a bit dicey, so our hosts settled on indoor games.

As we were leaving we got a great view of the ‘Blue Moon’  to end our year with. Although 2009 has had a few good moments, on average we are hoping and praying that 2010 will be a year to remember for some great reasons instead of the not so great ones of 2009!!!

This entry was posted in New Zealand and tagged New Zealand. Bookmark the permalink.